I somehow managed to hurt the middle finger near my nail on my dominant hand… it swelled up and throbbed for a few days, and occasionally I would accidentally bang it on something and endure excruciating pain.  I was worried that it was going to become a finger felon, but luckily with some topical ointment* it went away in just a few days.

Why is it that when you injure yourself that seems to be the most important part of your body to do anything?!  I apparently use my middle finger on my dominant hand A LOT! And not just for communication, haha, I kid. 😛

What I missed most was being able to draw, so yesterday and today I spent some time feeding my artistic side.

I played around with the tangle C-view, adding Sez and Tipple, and a twisty border (green square)… I love how C-view looks like a sea urchin…

I also decided what I wanted to do for the border of the purple square… Punzel.  I practiced Punzel several times…

Then added some Echo Lines (after figuring out how I wanted to do it) so that it would blend better with the rest of the purple square. 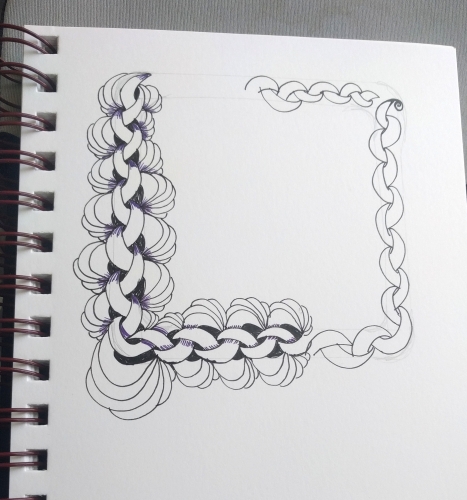 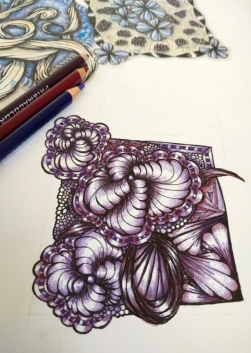 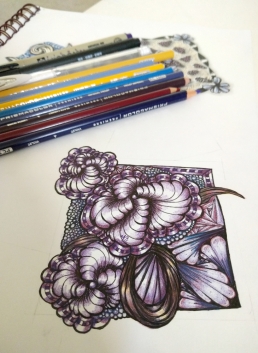 The page is becoming rather interesting. 🙂 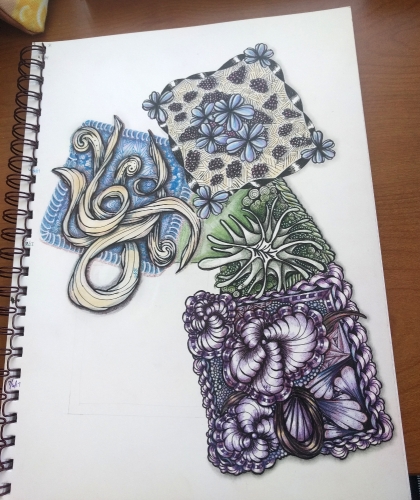 The page so far, one square to go

* For a day or two I put Neosporin on the area, mainly because I figured it would kill any bacteria and it had pain relief in the ointment which I figured would help the most.  Then I switched to Burt’s Bees Res-Q Ointment and that really seemed to help the swelling go down, three days later it was almost back to normal. Whew! 🙂 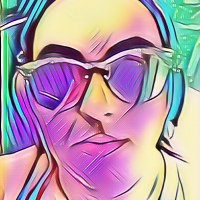