I woke up this morning with a migraine… ugh.  It started out as a skull headache (the pain was where a hat would cover my skull).  After taking 1/2 a dose of Excedrine, I felt the caffeine kick in (I’m very sensitive to caffeine) and felt both like I could run around the block and on the edge of jittery, but the headache had subsided… about 3 hours later, the caffeine had worn off, and the headache had moved to my forehead and behind my eyes, and I felt exhausted (the caffeine crash).  Oddly, even though I’m more sensitive to light and noise when I have a migraine, tangling was soothing.  I usually cannot read or watch TV because it is too much eye movement and light… but I guess since I was concentrating on a fixed object, my pen strokes, and not staring at a monitor it didn’t bother me… so I decided to catch up a bit on my 12 days of 3Zs zentangle challenge.  The two 3Z tiles are shown here with the other 4 days’ tiles of the 12 days of 3Zs in a mosaic… 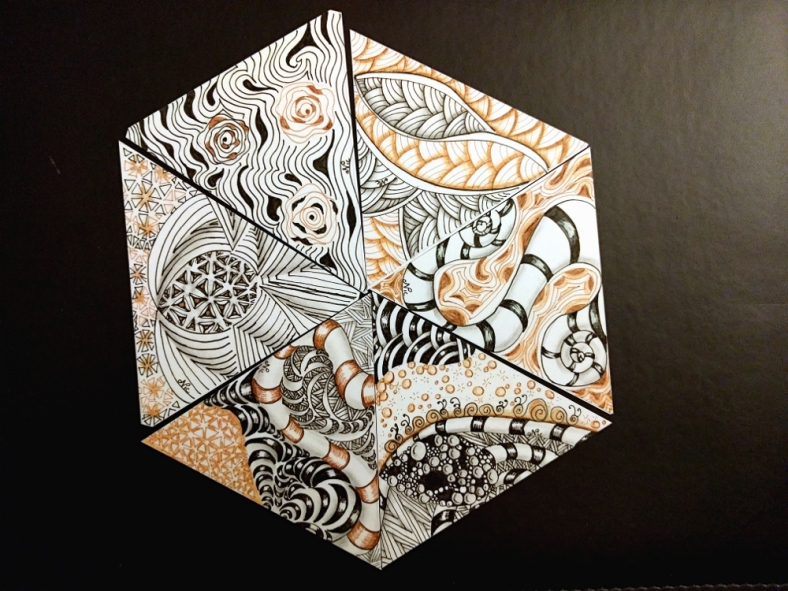 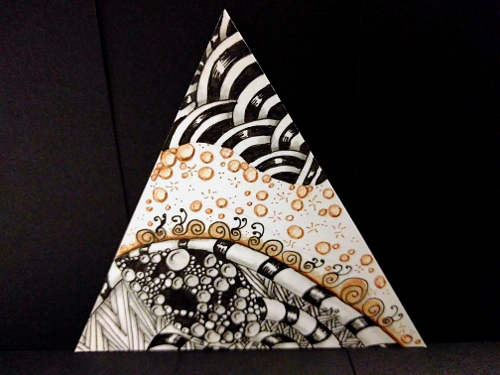 Day five’s pattern was Tipple, I created two sections of tipple – one, bubbles some that pop; and the other, I like to think of pebbles and silt being moved into a cove by water.  My husband said that it looked like the snails were having a party, I said they were drunk on rootbeer. 🙂  Other tangle patterns on this tile include: a shattuck/keeko hybrid, marasu, and b-twixt.

Day six’s pattern was Molygon, I love the wormy look I created with this one.  Other tangle patterns on this tile include: tripoli, marasu, triangular shattuck within molygon, and nekton.

I could have looked to see what day seven’s pattern was, but instead I decided to practice Tripoli and Diva Dance a bit more.

Here’s hoping the migraine will be gone tomorrow… goodnight everyone.

Join 409 other followers
Follow Photography by Nic on WordPress.com