This week’s Diva’s Challenge asks us to Relax while we create our Zentangles… not worrying so much about the end result, instead getting to that meditative state.  I decided to try out a few new tangle patterns and some new art supplies too.  My results are actually pretty good. 😀

First I tried out a new-to-me tangle called Lollywimple… I added Hollibaugh and  and some tentacles to the ends which gave me a really cool effect.  I drew the initial pattern with a sepia marker, then I played around with color shading.  I’m not completely happy with look of the background, but overall it is a good first try.  I really enjoyed working with Lollywimple and plan to use it more often…

UPDATE: I know, I know… the point of the exercise was to tangle like no one was watching, but my inner perfectionist just didn’t like the end result so I had to work on it a bit longer, the top left portion really bugged me and I darkened a few of the shadowy spots in the hollibaugh area … I’m happier with this result… 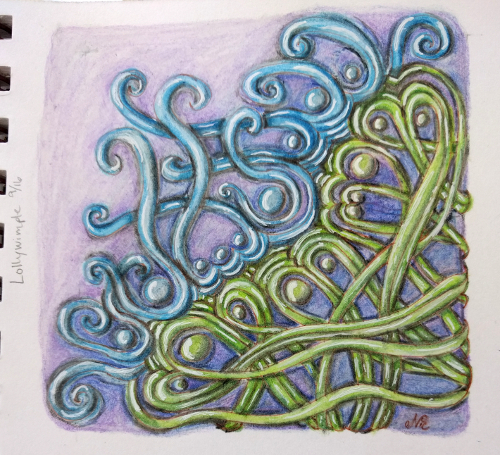 Next I wanted to try Mooka, it is a continuous flow pattern and I thought it would be more along the mindset of relaxation.  Watching the video really helped.  I used a grey marker and shaded with various pencils (ranging from B to 6B).  First I tried Mooka with smaller tendrils and I really liked the look (see top pattern below).  Then I tried Mooka with larger pods at the ends, as you can see, before the shading it was a bit of a mess.  For me, the larger pods were harder to control the flow.

Shading to the rescue! 🙂

I’m really enjoying playing with all my new art supplies and shading techniques.  There are so many tangle patterns out there, and I love exploring them.  Normally I would try to put several different patterns all together, it was a nice experiment to play around with monotangles.

4 thoughts on “The Shading Experiments Continue…”